This study is aimed to give a complete overview of the fan attendance figures of all domestic championships run by the European Professional Football Leagues. It contains a deep analysis of the results of our Member Leagues and Associate Members when it comes to stadium capacity and relevant stadium utilization as well as the evolution of fan attendance during the period of seven years, more precisely as from 2010/2011 football season till the last full completed season 2016/2017.

During this period, numerous football Clubs have improved their stadium capacity and level of comfort all across Europe. The new arenas developed in Poland and in France for the UEFA EURO 2012 and EURO 2016 respectively contributed significantly to boost the attendance figures registered in their respective Leagues’ Championships. We envisage Russia may well experience a similar trend after the upcoming World Cup in 2018. While there was a substantial increase of fan attendance in Israel, Sweden and Belgium, unfortunately football fans have not been immune to the adverse impact of financial and geo-political crisis that have been affecting economy and society in countries such as Greece, Romania, Ukraine and Turkey where attendances have declined.

Notwithstanding that, the cumulative leagues’ attendance remained stable during this six years period and more than 120 million football fans filled the European Leagues’ stadiums during the 2016/2017 season.

In the Premier Divisions, during the past season the German Bundesliga confirmed its leading position presenting the highest average stadium attendance while the English Premier League registered the highest level of stadium occupancy in Europe. Positive trends have been registered in both Ligue1 and LaLiga while the slightly negative trend of Serie A during the past seasons will be definitely compensated by the good attendance figures registered during the first half of the current season 2017/2018.

When it comes to the non-top tier leagues, the English Football League showed the highest European figures related to first, second and third tier divisions. Among the non-top tier leagues it is worth to mention the B Futura project developed in Italy by Lega Serie B. It represents a unique best practice to support clubs in renewing and upgrading their stadium facilities, with the aim to improve the safety, income, sustainability and customer experience. This work will definitely pay off and bring more football fans to the Italian stadiums in the future.  Finally, it is important to note how the Scottish Professional Football League, the Norwegian League and the Swiss

Football League are on the top of the ranking when considering the average attendance per match in percentage of country inhabitants.

The study and analysis of fan behaviors and development of new fan engagement practices are fundamental to attract more people and the millennials generation to our games. EPFL is committed to continue supporting its affiliates Leagues in these vital challenges with the launch of future initiatives in this area for the further development of professional football and enjoyment of our fans. Within this context, the EPFL has partnered with the European Stadium & Safety Management Association (ESSMA) and will officially present this study to the public on occasion of the upcoming ESSMA Summit which is taking place in Dublin on 16th and 17th January 2018. 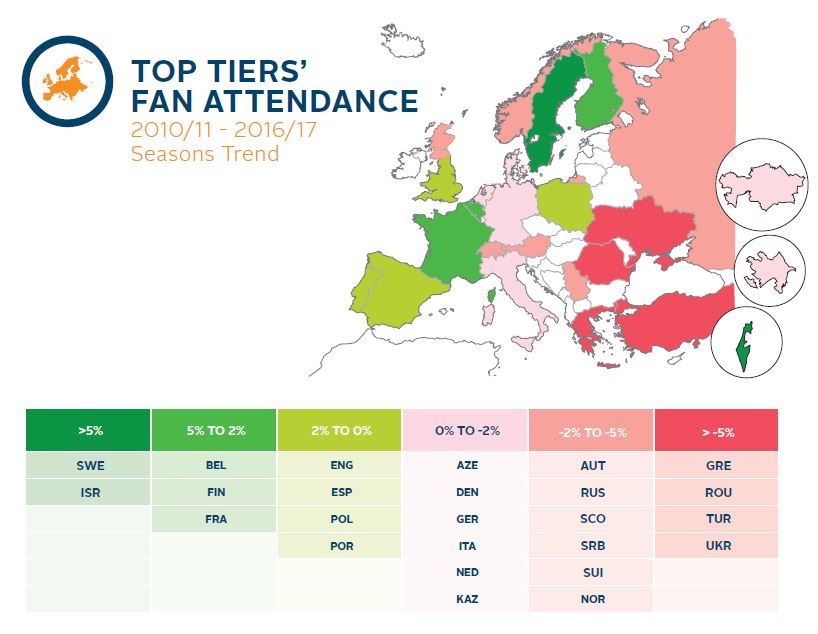