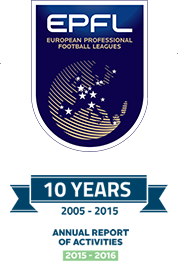 The EPFL celebrated this season its 10th anniversary. Founded by 14 European Leagues in 2006, our Association has grown steadily over the years. By welcoming during the past season a new member from Kazakhstan, the EPFL now counts 32 professional football leagues and associations of clubs from 25 countries, representing more than 900 clubs from all over Europe.

The 10th anniversary of the EPFL coincided with the election of Lars-Christer Olsson as new Chairman of our Association. Under his leadership, during a period of crisis for the governance of our game, the EPFL started a new era where the primarily goal of our Association is and will be to protect and improve the competitive balance of our domestic competitions.

The lack of competitiveness represents one of the greatest threats for football. The sporting and financial gap between clubs is increasing and should be reduced to maintain the popularity of our game. The EPFL believes that it is in the interest of all domestic leagues, all national associations and the vast majority of European clubs to defend this basic principle.

Within the EU framework, the EPFL has been also very active in the ongoing discussion related to the implementation of a European Digital Single Market and, in particular, with respect to the specific issues of portability, geo-blocking and cross border access to content.  It is therefore important to reiterate that territorial exclusivity for the selling of sports content related rights is and will continue to be the most efficient model for the sports sector as it suits the diversity of our business models and brings the greatest benefits to football consumers.

Furthermore, during this season the EPFL has supported the creation of the World Leagues Forum (WLF) to maintain regular contact with professional football leagues outside Europe. Through its representation in the WLF, the EPFL aims to engage with FIFA on a regular basis to promote open and transparent discussions with all stakeholders on important issues such as the international match calendar, players and transfers, and the promotion and safeguarding of youth football, among others.

During the season, the EPFL Administration has restructured its activities in many areas. A restructured Member Services department with a focus on league business development and a new Legal department have allowed the Administration to support our leagues in a more efficient and professional way. In addition, under the guidance of the Association’s Strategic Committees and their respective chairs, the Administration has been able to cover the most sensitive issues in the football, business and EU spheres.

During the current season, the EPFL will continue to foster cooperation between its various leagues to allow our members to progress and learn from their counterparts’ experience in a proactive manner. Our energy will be also focused on revising our statutes and membership structure to be ready, united in a concerted effort with our leagues, to further promote and develop domestic league football in Europe and beyond.